THE CLIMATE: The prevailing climate of the Jerez region is warm as a direct consequence of its low-lying latitude, it being one of the most southerly winegrowing regions in Europe (the town of Jerez sits on latitude 36º North). Summers in the region are dry and marked by high temperatures, thus provoking equally high levels of evapotranspiration, though the proximity of the Atlantic Ocean has an important role to play in maintaining levels of humidity and moderating temperatures, something that is more evident at night. Spring and summer, the seasons which mark the growing cycle of the vine, are characterised by two prevailing winds known as the Poniente (from the west) and the Levante (from the south-east). The former is cool and humid (humidity levels can reach ninety-five percent), whilst the latter is hot and dry (with humidity levels of around thirty percent). The average annual temperature is 17.3ºC with very mild winters, during which temperatures rarely drop below zero, and very hot summers where temperatures frequently rise above 40ºC. The region enjoys a very high average of between 3,000 and 3,200 hours of effective sunlight.

Levels of rainfall are quite high, on average six hundred litres per square metre per year, usually falling in autumn and winter. With certain exceptions, this amount of water is sufficient for the correct evolution of the vines, supplemented as it is by the all important nocturnal humidity provided by the nearby Atlantic Ocean. 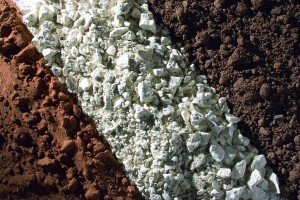 THE SOIL: The Sherry Region of Jerez is an area of open, gentle rolling hills or slightly sloping knolls – with gradients of between 10 and 15 per cent – covered by a limestone soil known as albariza, characterised by the extreme, dazzling whiteness it takes on during the dry months. This soft loam of chalk and clay comes to the surface on the tops of the hills, thus giving rise to the characteristic Sherry vineyard landscapes. It is rich in calcium carbonate (containing up to forty percent), clay and silica from the diatomite and radiolite shells present in the sea that once covered the region far back in the Oligocene period. The finest albariza soil, with the highest proportion of limestone and elements of silica produces the most select and sought after sherry wines in the Marco de Jerez.

Its main characteristic from a wine-growing point of view is its high moisture retaining power, storing each winter’s rainfall in order to nourish the vines during the dry months. Its leafy structure opens up like a sponge during the rainy season and absorbs immense quantities of water. Later the upper levels of soil bake hard under the heat of the summer, thus preventing the evapotranspiration produced by the region’s high levels of sunlight.

Albariza soil is easy to work and, being very moisture retentive, facilitates an excellent distribution of the root system. Roots up to twelve metres in length have been found at depths of up to six metres in albariza soil. 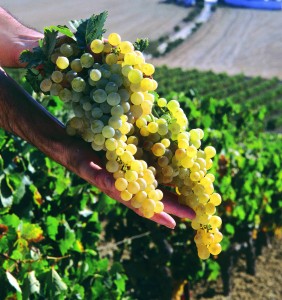 THE GRAPES: The following varieties of vine are being suitable for the production of our Sherry Vinegar: Palomino and Pedro Ximénez. The two are white-grape varieties

Palomino is the most traditional of all varieties and has been used here for centuries. Nowadays it is the undisputable leader within the Jerez Region and, given its compatibility with the albariza soil, local climate and the techniques developed by vine growers; it may rightly be considered a key element in the production of our unique Sherry Vinegar.

It has an open apex and large, orbicular, dark-green leaves with a closed V-shaped petiolar sinus. The underside of the leaf is downy in texture. The shoots are semi-trailing. Grape bunches are generally long and cylindrical in shape with a medium to high density of spherical, medium sized, thin-skinned berries which are yellowish green in colour. The grapes are juicy, fragile, sweet and flavourful with colourless juice.

Sprout during the last fortnight in March and ripen in early September. The excellent quality of its grapes and its responsiveness in the vineyard make it the favourite among wine-makers and vine-growers alike.

Pedro Ximénez is another very traditional variety used throughout the Jerez Region. Its greater sugar content and higher levels of acidity produce sweet wines of great quality. These grapes are generally submitted to a “sunning” process before they are vinified, with the aim of intensively concentrating the sugar content of the grape. Its fine leafage facilitates the process.

All of these conditions add to the quality and characteristics of the grapes, which give origin to the much appreciated Sherry Vinegars.